Kaizer Chiefs host SuperSport United on Saturday afternoon looking to restore some pride and rediscover the momentum from a month ago.

The New Year had started kindly for Chiefs and Gavin Hunt. Samir Nurkovic returned, they won three matches in a row. But now, three successive defeats have turned the picture on its head – Chiefs are winless in five games in all competitions. Again.

3 – It’s the third time this season that Chiefs have gone on a winless run of 5+ games (also November & December). They have suffered as many 5-game winless runs in the last four months as they did in the previous 45 months before today.

The image below shows how far Chiefs (yellow line) have fallen since the same stage last season. 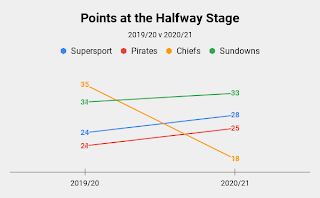 Something needs to change. Perhaps a milestone match can do it?

50 – This will be the 50th league match between the two sides in the PSL era, making it the most played fixture in the competition’s history, and the first to be played 50 times.

By virtue of the fixture draw and the two sides being ever present PSL sides, such a stat is possible. Any match involving SuperSport, Chiefs, Pirates and Sundowns will get its 50th episode in the second half of this season. But this one will be the first. Indeed, SuperSport have won 19 of those matches, Chiefs 17, with the other 13 matches ending in a draw. If anything this is Matsatsantsa’s favourite fixture:

19 – Chiefs have lost more league matches to Supersport than to any other side (19).

A loss on Saturday will be the 20th against SuperSport, making chiefs the 19th PSL side to lose 20 times to a single opponent. What is even more painful is that Gavin Hunt is responsible for six of those wins from his time with SuperSport. Ouch.

The recent history is also worrying for Chiefs, who have won just one of the last nine league matches against SuperSport (Drew 5 Lost 3 since 2016). And when you consider the start that Kaitano Tembo and his men have had to 2021, this afternoon’s task starts to look even harder. Only Sundowns (18) have won more points than SuperSport (16) in the league this year, while no team has scored more goals than SuperSport since the turn of the year (14).

5 – Tembo has won more matches against Hunt than he has against any other coach in his coaching career (5).

1 – Chippa will be playing their first home game in the league since 29 November 2020.

2 – The Chilli Boys have won both games they have played against TS Galaxy (Nedbank Cup 2020 & DSTV Premiership first leg this season).

4 – Baroka have won each of their last 4 matches against Leopards in all competitions by an aggregate score of 8-1.

5 – Baroka are winless in 5 home games in the league. No team has gone longer than that without a win this season.