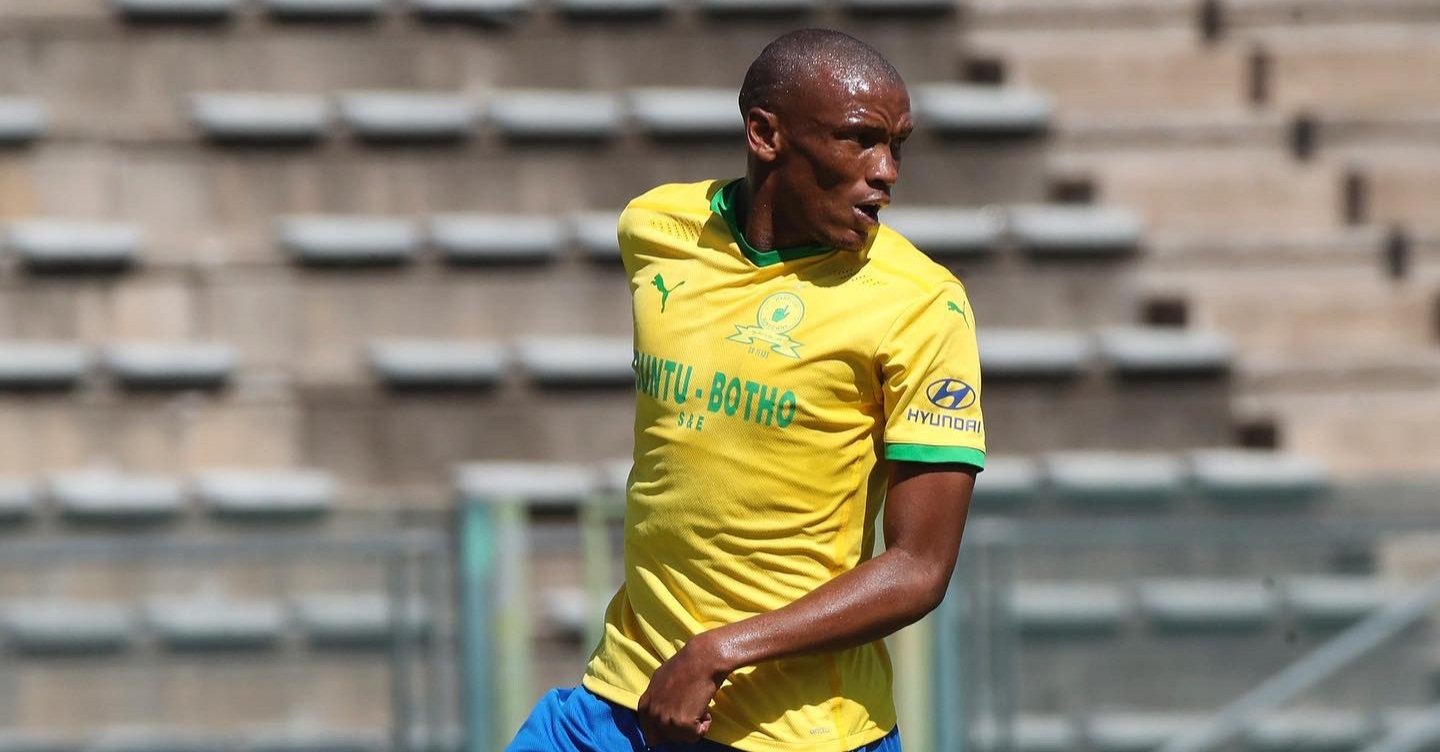 There are a lot of words that perfectly describe Mothobi Mvala: intimidating, aggressive, tenacious, and competitive. Notice that you won’t find the words “skilful” or “beloved” anywhere near that list. Mvala is quite the enigma. Adored by coaches, misunderstood by fans.

FARPost goes about searching for answers as to why the Bafana Bafana midfielder is simply un-droppable at star-studded Mamelodi Sundowns.

‘He does the work of three players’

The man who unearthed and developed him at Berea Albion Academy, Steve Haupt, says Mvala easily “does the work of three players”.

Haupt is mindful of the fact that football spectators want entertainment, but he is quick to point out that Mvala doesn’t do entertaining play. Instead, “he does the dog work”. He works his socks off for his teammates.

It’s the same attributes Owen Da Gama loved, having worked with him for three seasons at Highlands Park.

In fact, Da Gama says the first two names on his Highlands Park team sheet were Mvala and Peter Shalulile “because of their attitude”.

Without a doubt, coaches will be zooming in on a little more than playing an entertaining game. For Manqoba Mngqithi, the number of box entries, shots, assists, breaking of the defensive line with runs and intensity to counter press are testament to a player at the right level.

While football followers are fascinated by good ball control, excellent passing and dribbles, it all becomes ineffective when it’s not accompanied by an assist, forward pass, switch of play or even a goal. It’s the end product that matters. Does this skillful player help you to win matches?

“Give me a player in South Africa who, in one match, gives you two or more assists, a shot at goal, five box entries in one match,” Mngqithi tells FARPost. The above are very rare components of the game which Mvala possesses.

“I hear the hype about him [Mvala] not being the kind of player to play for Sundowns, but just take those stats that I gave you and out of all the midfielders, just check who the better midfielder is – both offensively and defensively,” adds Mngqithi.

According to Analytics Laduma, Mvala was one of the key players in the recent win over Chippa. Although the game ended 0-0, they are able to analyse actions beyond goals, and in particular the most common event in a game – passes. The passing network below shows which starters combined together (the thicker the line, the more passes were played between a pair of players). At first glance, it is clear how Mvala combined with so many of his teammates, when you consider how many arrows go to him and away from him. Also, the red circle shows that he passed the ball into areas considered “dangerous” more than any of his teammates.

Painful to the opponent

Interestingly, Sekhukhune United goalkeeper Tapuwa Kapini recalls how no-one at Highlands Park wanted to face Mvala even in training. The other players would rather not be on his trail, not because he is malicious, but because “he doesn’t pack out of a challenge”.

Kabelo Seakanyeng, a Botswana international, who faced him in the Cosafa Cup and CHAN tournaments, describes him as a ‘painful opponent’.

“Defensively very few players want to come against him, he’s very painful to the opponent,” the Morocco-based forward tells FARPost.

Many will remember that when Sundowns won the Caf Champions League title in 2016, the Tshwane giants had the likes of Leonardo Castro, Hlompho Kekana, Tiyani Mabunda, Wayne Arendse, Thabo Nthethe, Soumahoro Bangaly and Tebogo Langerman in their dressing room.

They all had height. Of course, upfront, they had nippy attackers like Percy Tau, Keagan Dolly and Khama Billiat.

Mvala, therefore, fits the physical profile of a player any coach would want to take to Africa.

“In Africa it’s very important to have the right numbers in terms of physical profile, that’s why it’s always important to have a tall striker, maybe one or two tall midfielders, then you’ve got two tall centre-backs. Fullbacks must not be short. You need to have a team that can compete in that space,” explains Mngqithi.

“He has the physical attribute to play at the highest level, he’s not just a player who helps you play but he has the profile to assist you with set-pieces because he is very strong aerially.”

In Da Gama’s books, the man nicknamed ‘Pogba’ is “physically one of the strongest players in the PSL”. Simone Conley, who worked as a conditioning coach and biokineticist at Highlands Park, tells FARPost that his fitness levels are undoubtedly a result of the work he constantly puts in at training.

Mngqithi concurs: “He is extremely fit, he’s one of the fittest. He’s one player I don’t remember hearing that he’s carrying a little bit more in terms of fat percentage or weight. He’s a grinder, he’s physically in very good shape.”

It is easy to see why he is able to maintain good fitness levels. “He’s a beast in the gym. When he’s cycling you’d think he’s on some drugs.

“I don’t think any of the players he competes with at Sundowns would complain about him playing ahead of them because at training he goes all out and he leaves everything on the pitch,” Kapini tells FARPost.

Da Gama remembers the few times he had to make tactical changes which meant sacrificing him. “He would actually be the first person to cheer on whoever was replacing him. He would not sulk after being substituted,” Da Gama recalls.

Former Bidvest Wits striker Calvin Kadi says while Sundowns are a ball playing team, “they need someone to bite in midfield”. He believes the 27-year-old perfectly complements his skilful teammates like Themba Zwane and Gaston Sirino.

“I recently watched Sundowns’ game against AmaZulu and Mvala was winning balls for Sundowns, making entries into the box,” he tells FARPost.

“Generally, Sundowns are hardly out of possession for a minute or two and to achieve that you need a player like Mothobi. His role is underrated, but it is very critical.”

Haupt remembers how teenage Mvala could hardly kick with his left foot when he joined the academy nine years ago.

Even Pitso Mosimane, the man who recruited Mvala to Sundowns before leaving for Al Ahly in October 2020, told Haupt he had “never seen a kid learn so quickly”. Haupt reveals that Mosimane first inquired about the former youth international four years ago.

Mngqithi, on the other hand, admits passing wasn’t always his strength, yet he has immensely improved.

“His passing game – the improvement is remarkable. I hear all the talk, but I’m seeing a player who continues to improve in front of my eyes and all the coaches will tell you the same story. Very soon he’s going to be our key midfielder and people will ask themselves what happened.”

In the four years Kapini played with Mvala at Highlands Park, he saw him play several positions with the same aptitude. “He played all positions, when I arrived he played centre back and then when we were searching for goals, the coaches would push him forward to play number 10.

“I remember one time we had a red card in Cape Town, he slotted in nicely at left back,” the Zimbabwean goalkeeper says.

At Downs, he is often seen roaming shrewdly from box-to-box.

Mvala may be tough-as-teak on the field, but off it, he is apparently a darling to his teammates.

“Before I even talk about him as a footballer, let me tell you about him as a human being. He’s one of the most well brought up boys that I have ever worked with,” says Mngqithi.